Good morning Friends! I hope that your week has been filled with a lot of Christmasy cheer. We have been busy wrapping, baking, and planning. Even during this sometimes stressful season there are many things to be thankful for.

I’m not really sure what it is but there is just something so special about Christmas. There’s an excitement that fills the air while working together as a family to make Christmas Eve dinner and straighten the house. And a contentment while drinking cocoa and watching our Christmas Eve movie in front of the fire.

As you know last week I broke my glasses. I was using contacts until I could get in to get them fixed, On Monday I was very happy that the eye people were able just to pop the lens out and put them in a new set of frames. (: 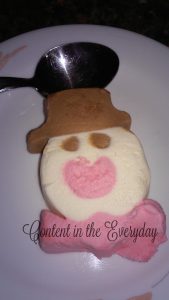 When I was little one of the local grocery stores sold flavored icecream in festive holiday shapes. We usually got a box or two around Christmas. As I got older they weren’t as easy to find. So I assumed that they had become a thing of the past until Thursday. Mom and Daddy had gone out to get the groceries for Christmas and as we were unloading the bags there were two boxes of festive icecream!! It made my day!

Merry Christmas!!
Until next time,