Good Afternoon everyone! So, I made a really stupid move today and ended up paying the consequences. This leads to the first blessing this week. 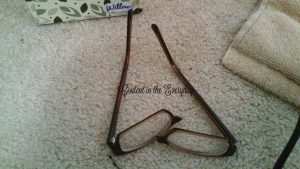 Okay, I know that this may seem silly but it’s seriously a huge blessing because I broke my glasses. As I was getting ready this morning I had put my glasses on the floor while sitting in front of the mirror doing my hair and such. As I went to scooch closer to the mirror I felt something crunch under my knee. I was hoping that it was the cord to the flat iron but come to find out it was my glasses. 🙁 I had one pair of contacts left that I had opened a couple of months ago (I don’t wear them everyday) and until I can get in to replace them that’s what I will be using. So, I’m very thankful that I had them because I’m as blind as a bat without glasses or contacts. Have any of you broken  your glasses? I’d love for you to share how in the comments below. 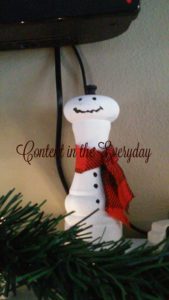 Every year at Thanksgiving my Grandma has a craft table set up where us girls (or guys) can make a few simple crafts after dinner. This year she had the suppllies to make snowman salt and pepper shakers. Mom and I each made one and decided to sit them on the mantle. This morning we noticed that one of their scarves was slipping down making it appear as though it  was “melting”. Evidently that’s what happens when you stick a snowman on the mantle. 😉

So the dog hates listening to sad, sappy songs on the radio! Yes, I am aware of how crazy that sounds but listen to this. The other day I put a CD in the player that played slow, somewhat sad songs and she whined through the entire thing!  Once I  took it out and put something more peppy in she laid down and went to sleep. We just thought that it was the particular artist until today when we put in a different mostly peppy CD that played one slow somewhat sad song and she whined until we changed the song.

4. Getting our Christmas Card pictures 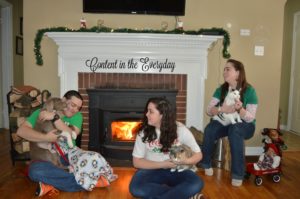 I don’t know about your family but in my family taking a coordinated picture with everyone looking coherent and happy is quite the challenge especially when you factor in two cats and a puppy. So, this year Mom decided to do something different. She thought that it would be less stressful and more interesting if we did a more candid shot. And you know what? It worked. We had a lot more fun and had more photos that we could actually use. (:

I hope that you all had a fantistic week filled with laughs and Christmas cheer. What are some of the little blessings that you noticed in your life this past week? I’d love for you to share them in the comments below.